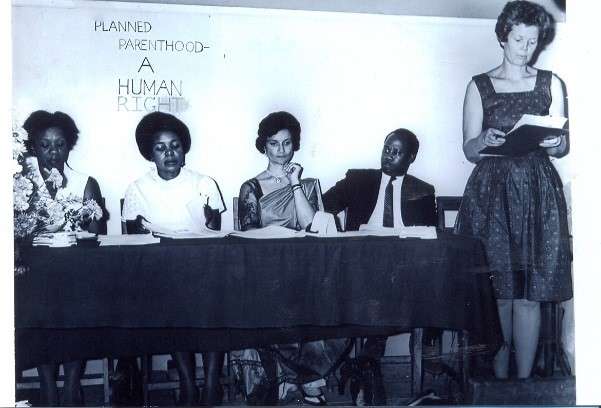 The Birth of Family Planning Association of Uganda (FPAU)

The history of Family Planning in Uganda dates back to the 1950’s and is closely linked to the visit of Ms. Edith Gates – Executive Director of Pathfinder International (standing). Ms Gates was visiting sub Saharan Africa to explore the possibilities of introducing modern family planning associations in African countries. She urged progressive Asian and African women of Mothers’ Union to form an association that would advocate for Family Planning. To have the impact they wanted, the women decided to transform this club of like-minded individuals into something more. That is when they founded the FPAU in 1957 with the first clients being attended at the Agha Khan Health Centre. 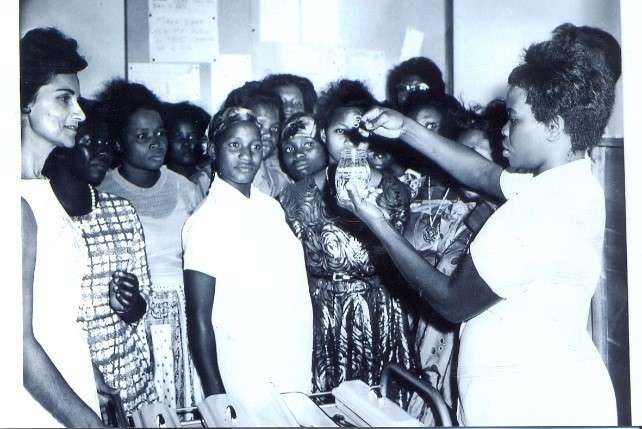 Registration and opening of the first family planning clinic

In 1963, after six years in operation, FPAU was registered as an NGO under the National Council of Voluntary Social Services. The Association opened its first clinic in 1964, and the number of those seeking family planning services took a steady rise.

Photo – Demonstration of how to use a coil (IUCD)

In 1966, amidst funding struggles, FPAU was registered as a member of IPPF. This development opened doors for further financial assistance. In May 1968, the 21st World health Assembly, under resolution WHA 21.43, recognized family planning as an important component of basic health care service. This global proclamation made many national governments including Uganda to start giving serious consideration to family planning. 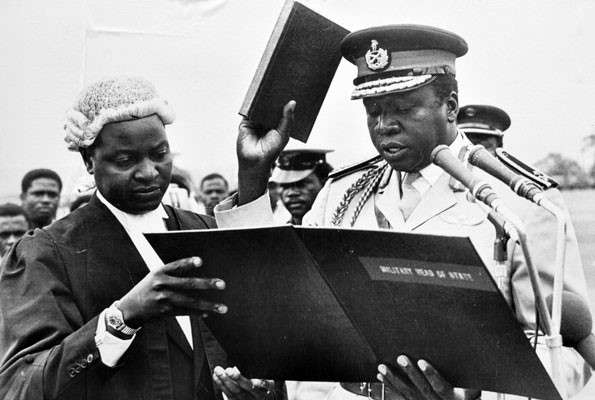 The 1970’s will remain etched in the minds of supporters of family planning as the most difficult period. When Idi Amin took control of the country after a military coup, he banned family planning, arguing it was against African Culture. Consequently, the government did not accept FPAU to open and run clinics in government hospitals and prohibited tutors and lecturers from giving FP lectures to medical students. It is during this troubled period that the total fertility rate and maternal mortality increased to levels that threatened attainment of safe motherhood and threw the population economic balance into disarray.  As the Association struggled to remain, the reputation of the country also suffered a great deal; donors were hesitant to support FPAU programs in such hostile environment. Only IPPF stood with the Association, sustaining it during these trying times. Within the organization, the difficult times also saw it experience some of the worst managerial and administrative challenges. However, despite all this and due to the resilience of FP advocates the Association registered great success through its Advocacy efforts which led the Ministry of Health to accept child spacing as an essential component of primary healthcare. In 1975, the Ministry instructed all of its medical units to work with FPAU and in collaboration with IPPF, FPAU influenced Makerere University to start a course on population research and demography. 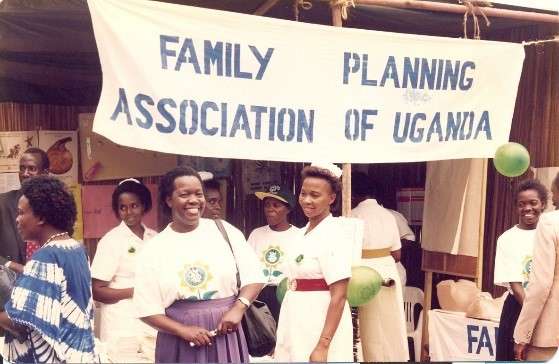 This decade began with a burst of activities and new developments that later shaped FPAU’s service delivery. By 1980, the association had up to 60 clinics. Twenty-three of these were owned and run by FPAU, while the rest being housed within government and mission health units. However, the outbreak of civil war in 1981 started eroding FPAU’s gains as some health facilities were destroyed. In 1982, FPAU celebrated its silver jubilee; this jubilant mood was amplified in 1983 when management of FPAU which had been conducted directly by IPPF was restored due to the improved managerial situation with in the Association. Still in this year, community based delivery of services, was started to take services closer. With President Yoweri Museveni taking power in 1986, FPAU continued to thrive. 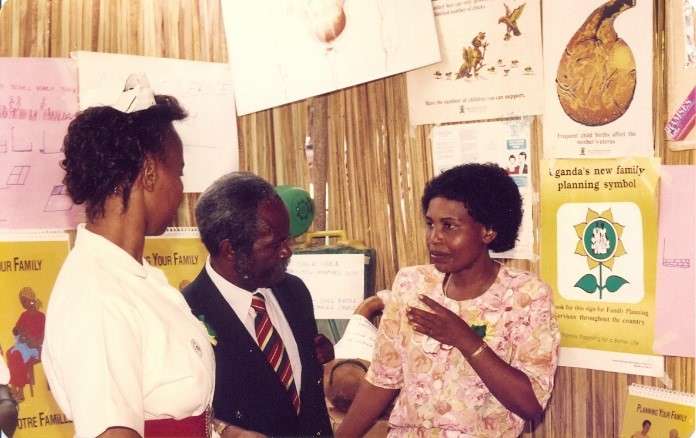 Consolidation and Expansion of FPAU

FPAU’s programming and response to SRH matters was defined by the fundamental issues highlighted in the 20 year Program of Action (PoA) adopted by the 1994 International Conference on Population and Development (ICPD) held in Cairo. FPAU’s work was also influenced by the Uganda National Population Policy launched in 1995 and the new constitution promulgated in the same year. In 1997, the Association developed its first five year strategic plan with core goals; Service delivery, Advocacy for reproductive health, and Institutional capacity.

While the Association had in the past focused on family planning, it was now required it to consolidate, crystallize and develop programmes that address the ICPD program of Action. FPAU also intensified its efforts to build alliances and coalitions as a strategy in strengthening its bargaining power on some of the essential SRH issues. These coalitions include Network of African Women Ministers and MPs (NAWMP), Uganda Chapter; parliamentary Forum on HIV/AIDs among others.

Looking to the Future: Change of name from FPAU to RHU

After a sterling performance since its formation 50 years ago, the FPAU started the journey in its next half of the century by changing of its name from FPAU to Reproductive Health Uganda (RHU) in line with the organisation’s current goals, objectives and realities on ground. The change of name was necessitated by the shift in paradigm from mere family planning to the broader and holistic SRHR that the organisation fully embraced since the International Conference on Population and Development (ICPD) in 1994. 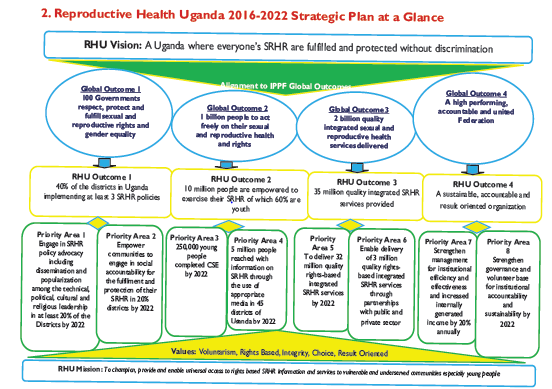 In 2016, RHU developed its 7 year strategic plan. This strategic direction defines more specifically the outcomes and priorities RHU intends to achieve in the 7 years of implementation and the strategies to accomplish this.

This same year, RHU went through a rigorous accreditation process by IPPF. RHU met all 49 standards – a pre-requisite for accreditation and will be awarded a certificate in 2018. RHU is the only affiliate out of the 140 IPPF affiliate organisations across the world to have this achievement three (3) consecutive times. 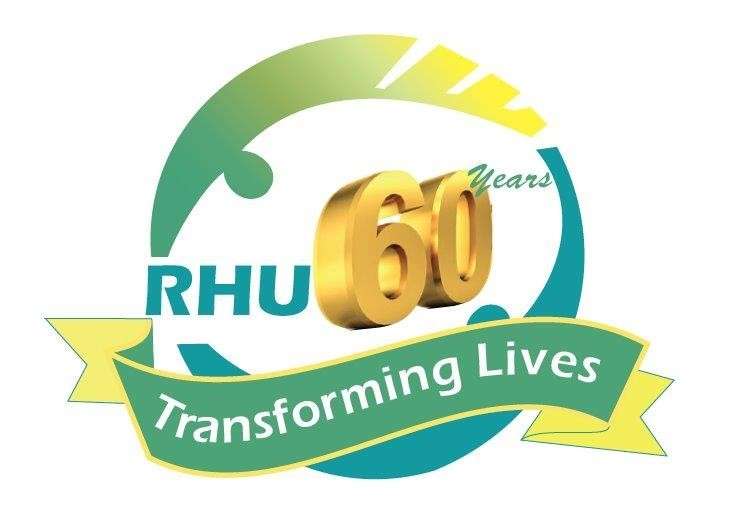 2017 was a great year in our history as we marked 60 years of existence. Many of RHU’s efforts over the years have redefined the SRHR landscape in the Uganda.