I WISH I HAD KNOWN MORE ABOUT CONTRACEPTIVES 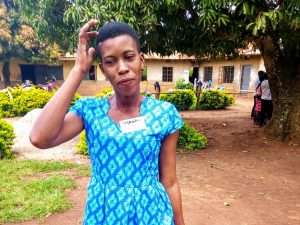 Nyakato attended our youth camp and told her story

Her radiance is hard to miss. Bubbly and so full of life, a young tailor with dreams the size of a truck. Her dress, a warm blue in color, is tailored to a fault! She knows it and is not shy about it. “I made this myself,” she will tell whoever cares to listen and strikes a pause. Though just in her early 20s, she is already a mother; a fact she loves but also worries slowed down her story.  Folks, meet Nyakato Rose, a young lady who wishes she knew about contraceptives much earlier.

She’s quite the extrovert, this Nyakato! Very comfortable in her own skin. No wonder she was easy to spot in the recently concluded youth camp in Hoima district, organized by Reproductive Health Uganda (RHU) and partners. Never shying away from a chance to talk, she volunteers to show the eager learners where her five-year-implants were placed and adds a reassuring smile. “Here!” she points before chuckling. “I don’t want to have children, for now, maybe after five years.” She believes that the implant, a longer-term contraceptive method used by many women of reproductive age, will allow her the time she needs to get her life in order before she has any other children.

True, when she got pregnant, Nyakato was still a teenager waiting to sit her O’ level examinations. She had big dreams, you know, some of which included teaching the world a thing or two about the African fashion. But they all came crumbling when she was found to be pregnant and the father of her child, the once charming love of her life fizzled into thin air. “Oh my God!” she sighs as the memory of the time she got pregnant comes rushing back. “I was totally confused, I don’t ever want to feel like that again.”

She was gullible or just didn’t know of the options present. “There was not much information,” she looks down. “But now I know and I am still learning.” Upon getting pregnant and watching the world turn its back on her, Nyakato heard an announcement by RHU about some family planning activities in the community. She quickly sought them out and got more than just a contraceptive; there was just so much more to learn. “You know, they just don’t give you the implant, they talk to you about so many other things and make you understand how your body works,” she tells of the chats that the RHU filed officers often have. “At first I wanted just pills, but after counseling and doing a check-up, I decided to get the long term method.”

Without the worry of getting an unwanted pregnancy, the youthful Nyakato can then go on and dream her dreams. “I am learning how to make clothes, in fact, call me a tailor for now,” she chuckles again. “But I am going to be a designer one day, I have to plan slowly and properly.” Looking at the hope, the glow on her face that came from knowing she can afford to dream again, one wonders what happens to the women who want but can’t access contraceptives? The 30.4% Ugandans aged 15-19 who would love to, but can’t find contraceptives, what happens to them? What about the 29.3% in Nyakato’s bracket, what happens to them?